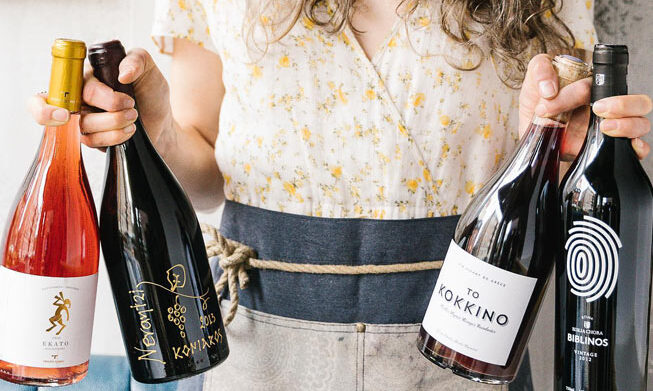 Let me start here: I AM NOT GREEK. Not one drop. I am so far from being Greek I might as well be Vulcan. I wanted to state this so you, the intrepid reader not get confused and think I have some nationalist skin in the game on this topic. Nope, I am just a guy, standing in front of a wine-making country, asking it to love him. Ok, I will stop butchering classic rom-com quotes now, but I want to just be clear: I’m not Greek, no Greek kidnapped my family and is forcing me to do this, and my spouse is not Greek and holding out sex until I write this.

So that we have that out of the way, let me get down to the nitty-gritty: Greece is responsible for creating nearly everything we take for granted regarding wine culture and now, after centuries of wandering the wilderness wine-wise, Greece is a nation that once again belongs on the world stage as one of the greatest wine producing countries.

When you think of wine, wine drinking, and the rituals that surround it, the Greeks invented it, full stop. I know the Greeks have this “Gus from My Big Fat Greek Wedding” reputation for claiming Greeks invented everything, but in this case, when a Greek says to you, “you know, the concept of the wine tasting was invented by Greeks. Also, Windex is used to disinfect grape leaves.” One of those things is completely true and the other utterly false. I will let you guess. Surprise! Greeks invented the wine tasting, from which we derive the word “symposium”, which originally was Greek for “to drink together with friends”. So, the next time you are shamed for day-drinking, just tell your boss, mother, or significant other that you are attending a symposium. You go from a drunken idiot to a sober-minded intellectual. You’re welcome.

To continue, Greece also created most of what we now take for granted regarding grape growing. Vineyard management, green pruning, the novel idea that certain grapes just grow better in certain places and thus make better wine. If you went back in time you could walk into a Greek vineyard, and it would look a lot like vineyards today. Of course, it you could go back in time you would probably rather use your knowledge of the future to win the lottery or stop Hitler, but you do you.

Greeks created the concept of the sommelier. So yes, I guess I have a job thanks to Greeks. On second thought I guess I do have skin in the game when it comes to hyping up Greek wine. Sorry I have deceived all of you. It was not my intention I promise. Greeks created different vessels to drink out of, were making wine out of scores of different grapes and were in general living their best life drinking wine. Then, rather than hoard this knowledge, they spread it around like drunk businessmen do with cash in Vegas. We owe them so much.

For centuries Greek wine and Greek winemakers were considered the best across the Mediterranean, everyone else was playing for second place and it was not close. Greeks were the Tom Brady of wine, without being so annoying.

All of that changed with the ultimate fall of the Roman then rise of the Ottoman empire. The Ottoman Turks took a dim view on alcohol and though they did not ban it outright, they restricted it enough to where Greek wine lay fallow while the rest Europe was making wines that became the finest in the wine drinking world.

Even after the Greek war of independence, wine making in Greece was largely dormant. Two world wars, civil wars, a junta, and general unstableness restricted what Greek wineries were creating. There were some making intriguing wines, but it was few and far between.

Then there is Retsina, the dreaded wine flavored with pine resin that may be the scourge of the wine world. White Zinfandel is close, but Retsina likely gets the gold for most reviled wine ever. Greeks had been drinking a version of Retsina for millennia and once tourism took off in the sixties, they ramped up production as it was so cheap and easy to make. Then they pedaled it off to international tourists who just wanted to drink and party. They did not give a hoot what the wine was like, they just wanted to be drunk on a beach. Soon enough people caught on that Retsina was awful. Yet here is the thing: flavoring a wine is not the problem, however it is imperative you make good wine as the base. Greeks were not doing that at all and thus, Retsina was garbage. So Retsina destroyed the reputation of Greek wine for decades. The Turks may have put Greek wine in a pan, Retsina threw it in the fire.

So, after creating nearly everything wine-wise, Greece had been in a centuries long slump. Then, like a Phoenix rising from the ashes, Greek wine took off. Starting around 2000, things started moving and moving fast. Outstanding young Greek winemakers trained both in Greece and around the world started opening wineries. In fact, over eighty percent of all Greek wineries are less than twenty years old. If you are legal to drink right now, you are older than nearly every Greek winery currently open. Let that rattle around in your brain while you sip your Assyrtiko. So, Greece is now this incredible fusion of the most ancient of traditions, coupled with the most modern of winemaking knowledge. It is a combination unlike any in the world.

Greece has over three hundred indigenous varieties, grown nowhere else on the globe, countless microclimates in a nation the size of Louisiana that will blow your mind, and a gang of young winemakers who are shocking the world with their outstanding, terroir driven wines. Greek wine is back and in a big way. Everybody likes a comeback story and Greek wine is one of the greatest of all time.

So Greek wine matters because now more than ever, when it comes to wine, we must combine the modern with respect for the past. Greek wine matters because it honors what Greeks created for us. Without Greece we would be barbarians drinking nothing but White Claw, and what an apocalyptic doomscape that would be. Modern Greek wine matters because finally, after centuries it restores their honor as a glorious wine making nation. Plus, Greece reached down through the ages and gave me a job, and that matters to me and more importantly, my landlord. So, the least I owe them is this essay. Yiamas.